We are in media

Ukraine’s municipal waste is overflowing its landfills, while recycling has nothing but room for growth.

Industrial waste is the much bigger problem, but municipal garbage is growing at an alarming rate. Ukraine’s 42 million people produce more than 36 million tons of garbage per year as of 2018 and 93 percent of it is trucked away to Ukraine’s landfills. By comparison, European Union countries landfill an average of 27 percent of municipal waste.

Landfill waste releases toxins that seep into soil and groundwater. Accidental fires and intentional waste burning by people spews dozens of toxic chemicals into the air.

“93 is an awful percentage,” said Nata Kochiashvili, a senior project manager at the waste management company Recycling Solutions. “It means that we basically don’t have recycling. This percentage can be reduced significantly.”

Improving the situation will take many steps — recycling is only one part of the waste reduction hierarchy. But every expert interviewed by the Kyiv Post agreed that what’s needed most of all is a comprehensive set of laws that spell out every stakeholder’s responsibility in the waste cycle and define a source of cash flow that would fund a thriving recycling industry. Existing legislation, they said, is practically nonexistent.

“Investment activity in the field of waste management is extremely low – due to the lack of the necessary legal framework and clearly defined areas of responsibility for all market participants,” wrote the All-Ukrainian Environmental League in an emailed statement.

Attention to the problem has been growing, both among the public and in government. More Ukrainians than ever before consider waste a top problem for the country. A Socis survey found that 57.7% of Ukrainians named garbage as the country’s top ecological problem, while 62.1% of Ukrainians consider the current recycling system unsatisfactory.

But fewer people want to contribute the money to remedy the situation. Only 32.2% of surveyed Ukrainians were willing to pay Hr 200 per month for effective recycling. Meanwhile, most companies would not be thrilled about paying for recycling or passing the cost to their consumers voluntarily.

“Everyone wants to pay less but also for recycling to appear,” said Serhii Volkov, the head of Druge Zhittya, an ecological non-profit organization.

Parliament is currently considering three separate versions of Bill 2207, which would lay the framework for a comprehensive waste management system in Ukraine and bring it closer in line with its EU association agreement. However, the bills still need a great deal of work before they’re ready for a vote, say ecologists and recycling executives. Furthermore, the framework would require the passage of multiple other pieces of legislation.

Separate bills on banning certain single-use plastic containers and recycling batteries are also being discussed in the Verkhovna Rada, Ukraine’s parliament, and supporters hope they might pass this year.

Many previous waste control bills have failed in Ukraine’s parliament, due to the lack of political will, lack of stakeholder consensus or lobbying by special interests, analysts told the Kyiv Post. Many hope that this Rada will have better results.

The biggest challenge to investment in recycling, is maintaining the funding to keep recycling centers running in the absence of laws that would dictate who would pay for them, said Roman Puchko, the co-founder of ReThink, an ecological non-profit organization.

“There is no business model, no incentives and no regulations that have yet been adopted,” he said.

Recycling requires sorted materials, which are in short supply in Ukraine despite its mountains of garbage and thousands of illegal landfills. Kochiashvili said that the country only has 26 sorting stations, which is not nearly enough to provide the requisite recyclable material for even Ukraine’s current recycling industry to utilize.

“This is very low,” said Petro Pavlovych Semko, the chairman of the presidium of Ukrvtorma, an association of companies that handle waste. “Every city needs to have its own sorting line. If a populated area has 30,000 residents, it needs to have a sorting line, along with separate (waste) collection.”

Regional governors have promised to build sorting stations in their areas. But money for sorting also has to come from somewhere. Currently, taxes pay only for the transport of waste to landfills and sources of revenue for recycling have not been defined. Neither has extended producer responsibility, which would put companies on the hook for waste from the products that they generate, either physically or financially.

Under the current laws, municipalities are responsible for waste in their areas. The cost of landfilling ranges from Hr 58 to Hr 110 per ton of waste, according to Recycling Solutions. This is not nearly enough to cover recycling costs, which would require tariffs of at least Hr 500 per ton.

The country also lacks sufficient waste separation. Many areas simply lack the infrastructure for separate collection and combine all municipal waste before sending it to the landfill.

“Most citizens are ready to sort… but what sense is there in separate collection if, as a result, all the waste falls into one container and is taken away by one machine to the landfill?” wrote the All-Ukrainian Environmental League. On the other hand, the league adds, even if people are willing to sort, few know how to do it properly, to prevent contamination of usable material.

“Installing containers is not enough,” agreed Ivanna Davydenko, a spokeswoman with the nongovernmental organization No Waste Ukraine. “It is necessary to train people to use them.”

These are barriers for recycling companies, which need some kind of guarantee of quality about the materials they receive. “The better the separate collection of waste, the less an investor has to spend” on recycling, Kochiashvili said. 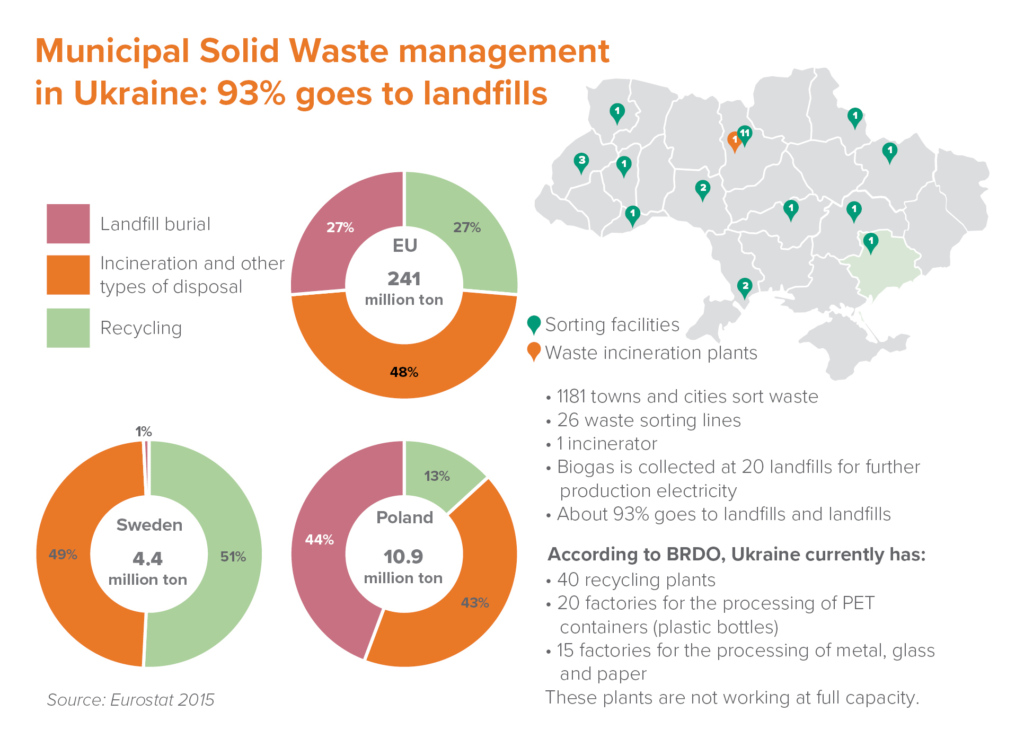 A graphic comparing waste collection in Ukraine compared to European Union countries. The map on the left shows the number and location of sorting facilities and incineration plants across Ukraine. Ukraine data compiled by Recycling Solutions in 2019. Europe data compiled by Eurostat in 2015.

These factors led to Ukrainian recycling companies importing usable waste, like paper, plastic and glass, from abroad, even as Ukraine drowns in its own garbage. Kochiashvili said that the country imported close to 100,000 tons of polymer waste in 2018, worth $40 million. Ukraine’s polymer recycling capacity is only about half-filled, she said.

Foreign waste is cheaper for multiple reasons. If a country has extended producer responsibility, recycling quotas, and taxes and subsidies that pay for recycling, the waste will go down in price.  Furthermore, if burying the waste in landfills is outright banned or accompanied by prohibitive costs, it is cheaper to send the waste to be incinerated for energy or exported abroad.

Cheaper waste imports also pull down the price of Ukrainian waste, making it more difficult for sorting enterprises to break even. Recyclable material prices are also affected by global resource costs and Ukraine’s energy costs, which have gone up in 2019.

Semko added that Ukrainian stores often sell waste paper and plastic to recyclers through tenders. Meanwhile, in many EU countries, the opposite takes place — supermarkets bring their waste to recycling factories and even pay them to take it off their hands, as it is cheaper than sending it to the landfill or burning it.

Last month, Oleh Bondarenko, the chairman of the parliamentary committee on ecological policy, announced that the committee is looking at three versions of a bill that would establish a framework aligning Ukrainian waste policy with EU directives.

The legislation would define the function of a central body for waste regulation, introduce extended producer responsibility and define the technical standards for the burning of waste that meets EU standards. Under the framework, all municipal waste created in Ukraine would need to be tracked and owners of the waste would be financially responsible for its management. The bills also lay out fines for violations.

The committee will be working with the European Commission to improve the legislation to a point where it can be implemented. President Volodymyr Zelensky called for a bill to be passed by the end of the year.

Davydenko said that the group consulted lawmakers on adding extended producer responsibility to one version of the bill, 2207-1. No Waste Ukraine’s Eugenia Aratovskaya wrote on Facebook last week that the version could pave the way for public sorting stations.

Still the bills are in constant flux and ecologists and recycling executives said that the legislation is very much incomplete and needs a great deal of work.

“The main thing is that this legislation does not define, from a legal point of view, who is the owner of the waste,” said Olga Sukhopara, a member of ReThink. The three versions of the bill provide some abstract definitions, she said, but does not nail down final responsibility.

As the bills are frameworks, they will require other bills to slot into the final version, to regulate various aspects of waste management. “Those are probably being worked on,” said Sukhopara. “But the question is, why not submit everything as a single package?”